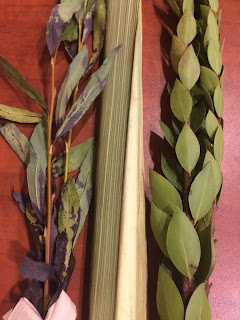 Sukkot is a holiday of technological challenges, major and minor, that pit a Jew against the forces of nature.  Challenge #1:  Build a structure that is temporary and flimsy enough that it meets the criteria for a sukkah according to Jewish law, and strong enough to withstand the wind and rain that many Jewish communities can expect at this time of year.  Challenge #2:  Keep the Lulav’s willow and myrtle branches looking fresh, with vibrant green leaves, when natural processes lead the myrtle leaves to dry out and the willow leaves to turn black and grow mold.


Our synagogue distributes care instructions with the Lulav and Etrog sets that we sell.   Fortunately, the etrog requires no special maintenance (other than being careful when handling it so that the pitom protrusion does not fall off).  We instruct for the myrtles and willows to be wrapped in a wet towel or newspaper and refrigerated when not in use, or else they will decay (and we remind purchasers that the tropical Lulav (palm branch) does not want to be refrigerated, or else it will decay).   But even though I am the one who has written and circulated these instructions, by the end of Sukkot, I am always the one whose myrtle and willow leaves have clearly seen better days.
I take some consolation in knowing that the decay of the willow branches is not a recent phenomenon. The sad condition of the willow branches at the end of Sukkot is even mentioned in classic rabbinic texts.  The midrashic collection Psikta de-Rav Kahana, from the year 700 or earlier, includes various allegorical interpretations of the Four Species.  In one interpretation, the etrog corresponds to Abraham, the palm branch corresponds to Isaac, the myrtles correspond to Jacob, and the willows correspond to Joseph, “for just as the willows decay and dry out before the other three species, so did Joseph die before his brethren.” (PdrK 28)   A similar midrash connects the Four Species to the Four Matriarchs, and the willows correspond to Rachel, because she died at an early age, as do the willows.  Of all the Four Species, the willows are a symbol of decay and loss. 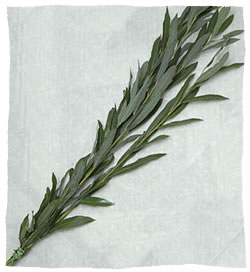 In fact, this understanding of the willows can help us understand the mystifying role of the bundle of willows on Hoshana Rabbah, the final day of Sukkot.  After seven processions with the Lulav and Etrog, it is traditional to put down the Lulav and Etrog and pick up a bundle of five willow branches, which -- after the recitation of several prayer-poems for the occasion -- are beaten on a hard surface until the leaves fall off.  There are diverse explanations for this unusual ritual.  Some traditional commentaries see the leaves as representing the sins that have fallen away at this conclusion of the penitential season.  Some academic scholars note that some other Near Eastern cultures had willow-beating ceremonies that were fertility rituals, and Hoshana Rabbah may be the Jewish version of these rituals.  While I am not qualified to weigh in on why this ritual originated, I do know what invariably has gone through my mind when I have participated in it:  I have considered it as a dramatization of what is soon to happen in nature around me.  The leaves will fall off the trees, winter is coming, and time marches on.   Like the more gradual decay of the willows over the course of the Sukkot holiday, like dwelling in the sukkah at exactly the point when the weather is likely to turn, the beating of the willows makes me maximally aware of the passage of time, arousing in me a bundle of diverse feelings including wistfulness, urgency, and hopefulness for the future.

Writer and educator Parker Palmer wrote in a collection of essays about the seasons: “My delight in the autumn colors is always tinged with melancholy, a sense of impending loss that is only heightened by the beauty all around. I am drawn down by the prospect of death more than I am lifted by the hope of new life.”  Palmer notes, though, that autumn is also the season when seeds are scattered to ensure the renewal of life after the winter, teaching the “hopeful notion that living is hidden within dying.”   So too, Sukkot reminds us of the natural processes that are winding down to set the stage for rebirth in the coming year.  Just two days after Hoshana Rabbah steers us to confront loss, we begin the Torah reading cycle anew on Simhat Torah:  “And God said: Let there be light, and there was light.”   How can I ensure that these willow leaves, decayed and broken, will help me to seek and guard God’s light in the coming year?