Showing posts from April, 2012
Show all

By RS - April 20, 2012
Periodically, here at the United Synagogue of Hoboken, we like to play a game we could call “Stump the Rabbi.”  The rules are simple:  people in the community pose questions to me, and I do my best to answer them.  And not infrequently, I admit that I am stumped (and then I try to look up the answer). As we approach Yom Ha-Atzma'ut, Israel's Independence Day, I would like to tell you about one of the earliest games of "Stump the Rabbi" ever recorded.  Travel back in time with me, to more than 1000 years ago.  You are a Jew in Spain, and you hear a fascinating story about how there's a powerful kingdom in central Asia where the entire kingdom converted to Judaism!  At first you think it's just a set-up for a bad joke, but then you hear the whole story:  that the king of this nation, called the Khazars, in the Caucuses (in the region of contemporary Georgia, Azerbaijan, Uzbekistan, Kazakhstan, Afghanistan), had had a dream in which God appeared to him and told h
1 comment
Read more

By RS - April 19, 2012
Today is Yom HaShoah, Holocaust Remembrance Day. Below are some thoughts, adapted from my remarks from the 8th day of Passover, focusing on how the date for Yom HaShoah was chosen.  Also below are some remembrances of Holocaust survivors who have died during the past year who were connected to our synagogue community. יהא זכרם ברוך - may their memory be for a blessing. It is 1949.   The new State of Israel is trying to figure out what is the most appropriate day to memorialize the Shoah.  They could have chosen any date of the year -- as Nazi brutality took place 365 days of every year during that terrible period.   Imagine yourself in Jerusalem, in the year 1949, at a public hearing on this question.  A young man, a survivor, approaches the podium.  He says:  “We are devastated by what we have experienced, by what has been endured by our families, our communities, our people.  But let us remember that our tradition warns us against tampering with the Jewish calendar, a
Post a Comment
Read more

By RS - April 11, 2012
This year's installment of the Seder Trivia Game. 3 unusual stories of Pesach in the news .... two are true, one is false. (If you follow the Jewish news closely, this one won't be too hard.) Previous years' Seder Trivia Games are on elsewhere on my blog.   Story #1:  One of the most unusual moments of the Jewish year happens on the day before Passover, when the rabbi of the community sells the community’s Hametz products to a non-Jew, so it will not be owned by Jews over Pesach. After the holiday is over, the sale is reversed and the Hametz is returned to the people in the Jewish community. This year, one midwestern Orthodox rabbi was pondering to whom to sell his community’s Hametz -- and he came up with an idea. he thought of a person who was internationally renowned for identifying wise and somewhat unusual investments. His name, of course, is Warren Buffett. So this rabbi of the Jewish community of Omaha, Nebraska wrote a letter to Warren Buffett, the legendary in
1 comment
Read more

Thinking of the Book of Job, at Robinson's Arch in Jerusalem 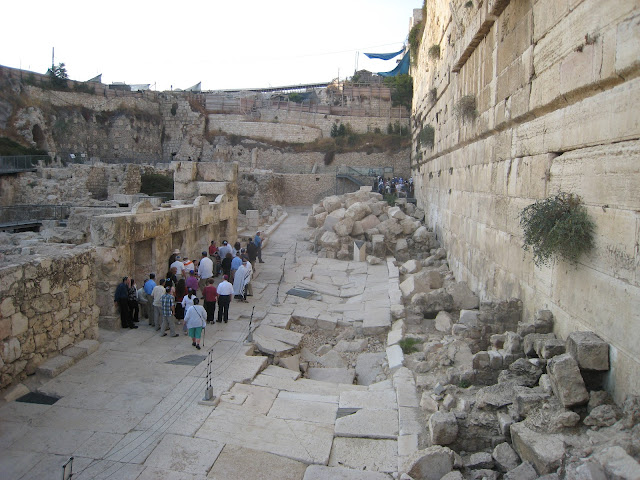 USH Trip to Israel at Robinson's Arch, Jerusalem, summer 2009 A Visit with Job at the Kotel (adapted from Rabbi Scheinberg’s sermon on Yom Kippur morning, 2009/5769) It's a peculiar place to pray, amid all these huge, broken stones.  It’s peculiar to celebrate in a place like this that bears so many physical reminders of tragedy. It’s Friday evening in Jerusalem – you are wearing your special clothes for shabbat - joyous melodies to welcome shabbat surround you - and yet there is something incongruous about the setting, because you're sitting atop ruins, bits of Roman-Jewish buildings from long ago. As the Hebrew poet Yehuda Amichai described this place, “Capitals and broken pieces of columns scattered like chessmen in a game that was interrupted in anger.” You are at the place known as Robinson’s Arch – the area along the Western Wall – otherwise known as the Kotel - that is set aside for non-Orthodox Jewish groups for communal prayer, where men and wom
Post a Comment
Read more

By RS - April 05, 2012
At our synagogue's congregational seders for the last few years, we have played the following game:  I have collected stories of unusual Pesach customs, and shared three such stories with the community:  two true stories, and one fictional story.  Participants then have to guess which two stories are true and which one is false.   (If you listen to Wait, wait, don't tell me, you get the idea, except that only one story is false.)  See Round 1 here. Here are the stories from two years ago.  Do you know which one is false? Story #1: This is the story of how Israeli fishermen prompted a crisis in Israel's water supply. You may know that the laws of avoiding Hametz (leavened products) on Passover are especially strict.  According to Jewish tradition, even the most minute quantity of Hametz can render something inappropriate to use on Passover. And you may know that Israel's main water source is the Sea of Galilee (also known as Yam Kineret).  The w
Post a Comment
Read more
More posts