Showing posts from April, 2013
Show all

Dipped in blood, but flying free: Thoughts on Yom HaZikaron and Yom Ha-Atzma'ut and Parashat Metzora 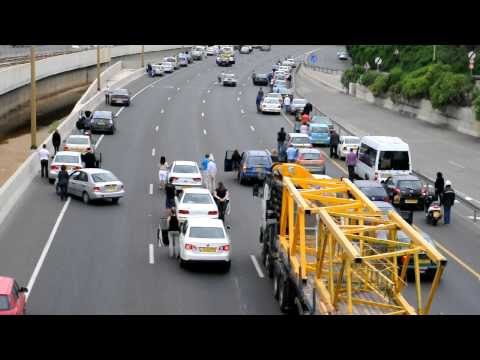 Jewish holidays feel different in Israel.  Maybe it’s because outside of Israel, celebrating a Jewish holiday is a somewhat counter-cultural activity, while in Israel, Jewish holidays are mainstream and celebrated by the entire society.   Or maybe it’s because so many Jewish holidays celebrate events that took place in Israel.  And some holidays are celebrated completely differently in Israel from how they are celebrated outside of Israel. Yom Ha-Zikaron, Israel’s Memorial Day, falls every year on the day before Israel’s Independence Day, Yom Ha-Atzma’ut.   Israel’s independence day bears some resemblance to Independence Day in the United States.  It’s a day for parades and barbecues, a day for celebrating and not necessarily for reflecting deeply on the meaning of the holiday. But Yom Ha-Zikaron, Israel’s memorial day, bears almost no resemblance to the American Memorial Day that we will observe in May, that is for most Americans simply a day off to have a barbecue and go t
Post a Comment
Read more

By RS - April 05, 2013
"Don't forget your tambourine" One of the most unusual musical theater productions ever staged was a children's opera called Brundibar .  It was written by a Czech-Jewish writer and composer named Hans Krasa, in the early 1940's.  What is extraordinary is the place where he wrote it - which was in the Terezin concentration camp  (sometimes called by its German name, Theresinstadt).  There, tens of thousands of Czech Jews were interred, kept in abominable conditions, subjected to harsh labor, and in most cases, soon deported to Auschwitz where most of them were murdered. So this is not the optimal circumstances for staging a children's opera. And yet, this opera was staged 55 times in Terezin, with musicians and a cast of children from the camp.  (It should be noted that such a thing would only have been possible at Terezin, which was set up by the Nazis as a camp to which they could welcome western observers.  Conditions were certainly better than they
Post a Comment
Read more
More posts