Showing posts from February, 2012
Show all

By RS - February 07, 2012
Some thoughts for Tu Bishvat, the Jewish New Year for the Trees. One of the most famous experiments in child psychology was conducted by Walter Mischel.   He would give preschool-age children a marshmallow, and then a tantalizing dilemma:   the child could eat the marshmallow now -- or, if the child succeeded in waiting for several minutes, the child would receive two marshmallows. This “marshmallow experiment,” as it came to be known, examines one of the most essential life skills:   delay of gratification.   Mischel and his team found that most of the young children were unable to delay their gratification; some ate the marshmallow immediately, and others made an effort but could not wait for more than a couple of minutes.   However, approximately 30% of the children were able to develop strategies that helped them to delay their gratification for the entire fifteen minutes.   Some children even blocked the marshmallow from their view so they could more easily focus on o
1 comment
Read more

"A Jewish journey through loss, bereavement, and comfort"

By RS - February 06, 2012
This is the text of a sermon I delivered in 2006, shortly after the sudden loss of my mother, Elissa Scheinberg z"l, in an effort to articulate the wisdom of the Jewish traditions surrounding bereavement and mourning. Adonai natan, vadonai lakach . God has given, God has taken. Yehi shem adonai mevorach . May the name of God be blessed.  (Job 1:21) At dozens and dozens of funerals I have led friends, congregants and family through the recitation of these words. But eight weeks ago, as I said them at my mother's funeral, the experience was unprecedented for me. I've been in this movie before, I thought, but I was always playing a different part. Even at the funerals of my grandparents, and of friends, my role was always to "take care" of the mourners who were 'closer in' to the circle of grief than I was. and here I was, at the innermost circle. I would like to tell you what it's like to be at that innermost circle - from a Jewish
1 comment
Read more 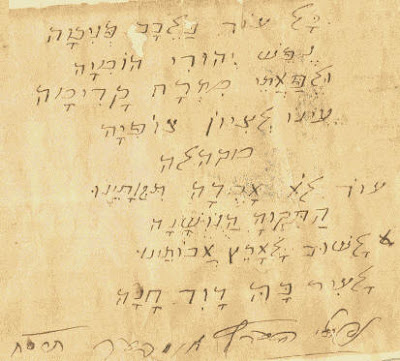 Last Saturday night I taught a session called "Hatikvah - the Untold Story" at the Sweet Tastes of Torah community event in Fair Lawn NJ.  It was an exciting way for me to combine my interests in Israel, Jewish liturgical poetry, and music. Here are some links to the resources I discussed about the evolution of the words and music of Hatikvah. Words: my source sheet http://www.piyut.org.il/textual/359.html  - Naftali Hertz Imber's original poem 'Tikvateinu' http://www.musiccathedra.bravehost.com/hatikva.wmv and  http://www.musiccathedra.bravehost.com/ch10.wmv - Hebrew video interviews with Astrith Baltsan about her book about Hatikvah, including discussion of the words and musical examples. Music: http://youtu.be/lDJUDqtxK6M - early recording of Hatikvah, 1918, by Alma Gluck and Efrem Zimbalist Jr  (using 'the old words') http://youtu.be/adTjy-TIW_Q - Romanian folk song "Carul Cu Boi" ("A cart with oxen") -- the
3 comments
Read more
More posts