Showing posts from January, 2017
Show all

Quebec City... Charleston ... Oak Creek ... Har Nof ... Hebron ... Birmingham ...  The word 'sanctuary' implies a place of safety, a place where one can stand or kneel before God in prayer and fully inhabit one's vulnerability. But we also know that houses of worship can be targets of hatred and murderous violence. I remember my reaction upon learning about the massacre or worshippers in the synagogue in Har Nof in 2014 -- and I imagine that Muslims throughout the United Stat es and Canada are feeling something similar now to what I felt, some painful mix of grief and fear and indignation and concern, as I made unsuccessful efforts to cleanse my mind of images of blood and violence in what is supposed to be a place of peace and tranquility. The horrific murders in the masjid in Quebec City yesterday should shake every person of every faith -- because of the precious lives that were lost, and because we know that this massacre could have taken place in our own house
Post a Comment
Read more

Thoughts on the Inauguration

By RS - January 20, 2017
I have started blogging at the Times of Israel web site -- you can find my thoughts on the US Presidential Inauguration there, at http://blogs.timesofisrael.com/kings-and-presidents-bowing-and-standing/
Post a Comment
Read more 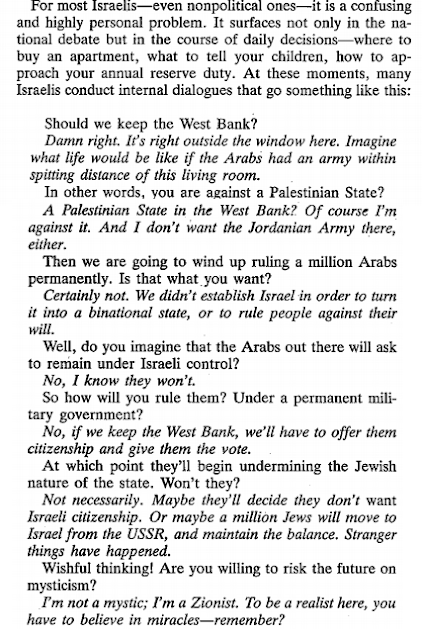 Israel's policies regarding settlements in the West Bank aka Judea and Samaria are in the news even more than usual -- with the United Nations Security Council resolution two weeks ago, Secretary  of State Kerry's address last week, and the nomination of a US ambassador to Israel who stakes out a position to the right of Prime Minister Netanyahu by stating his principled opposition to a Palestinian state.  One of the more entertaining books about Israeli society of the 1970s and 1980s is Zeev Chafets's book " Heroes and Hustlers, Hard Hats and Holy Men: Inside the New Israel," published in 1986 ( and with used copies now available for nearly free ). I remember enjoying this book when I was in high school.  I recently took a look at it and was sad to be reminded that more than 30 years and so many lives later, not much has changed regarding the major outlines of the conversation about Israeli policies regarding the future of the West Bank. The choices remain mo
Post a Comment
Read more
More posts