Showing posts from October, 2011
Show all

By RS - October 05, 2011
This was a Yom Kippur sermon from 2008 .... but as I was looking over it I decided I liked it enough to put it on my blog. One of the themes of Yom Kippur seems to be making lists:  lists of categories of vows that get annulled in Kol Nidrei; lists of sins to which we confess in Al Chet; lists of loved ones who have died, whom we remember at Yizkor; and perhaps most importantly, the lists we make inside our minds:  Lists of people to apologize to and to reconcile with, and lists of changes we pledge to make in our lives during the coming year. List making is in vogue this year in a big way.  Look at recent or current best selling books like “101 Things to Do Before I Die,” and “1000 Places to See Before You Die.”  These books address the phenomenon of “life lists” - lists of things that people want to accomplish at some point in their lives.  It’s a practice adapted from bird watchers who keep lists of the varieties of birds they have seen and aspire to see, and of mountain c
3 comments
Read more

Ten years ago, two experimental psychologists at Harvard, named Christopher Chabris and Daniel Simons, created what has become one of the most famous experiments in the behavioral sciences. Before you read further, you may want to try this demonstration:  The participants in this study in the study were given a simple task. They just had to watch a brief video that included several people passing basketballs back and forth to each other. Three of these players were wearing white shirts, and three were wearing black shirts. The task was simple:  watch the ball that was being passed among the players with the white shirts, and count how many times the basketball was passed. This was not such a difficult task - most people came up with the right number. But then, the participants were asked: did you notice anything unusual about this video?  A majority of participants said, no, not particularly.  But - if you watch the video again -- you see that right in the middle o
Post a Comment
Read more

Sermon for 1st day of Rosh HaShanah 5772: "Hagomel la-chayavim tovot" - "Who bestows favor upon the undeserving" 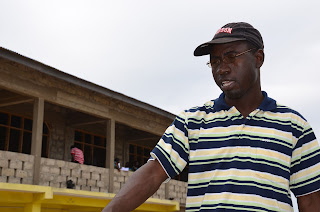 (photos are by Rabbi Will Berkovitz and Rabbi Suzanne Singer) Baruch atah adonai - eloheinu melech ha-olam - ha-gomel la-chayavim tovot - she-g’malani kol tov. "Blessed are You, Adonai our God, who bestows favor upon the undeserving,  and has bestowed favor onto me." Several minutes ago, I invited you to join with me in reciting this blessing - all those who recovered from illness, or had surgery, or extensive travel, or who had endured any other brush with danger during the past year.  It’s the traditional blessing of thanksgiving -- - the Birkat ha-gomel - that is recited upon such challenging moments of life. More than 12 years ago, I recited this blessing in this congregation after I was attacked on a subway platform and realized how grateful I was to have survived the attack.  And ten years ago, many of us remember how - on the first shabbat after 9/11 - every single person who came up to the torah for an aliyah - a torah honor - recited this Birkat ha-Gomel b
1 comment
Read more
More posts