Showing posts from September, 2021
Show all

By RS - September 12, 2021
Shabbat Shalom!....... How embarrassing!  I got you all to say ‘Shabbat Shalom’ even though as far as I know it’s Wednesday!!  Actually, this happens all the time. Raise your hand if you have ever mistakenly said ‘Shabbat Shalom’ to someone when it wasn’t Shabbat. I bet this is especially likely to happen in the synagogue - where many of us are here so frequently on Shabbat that it just seems natural to say Shabbat Shalom when we’re here.  (And being here more often than most, I am a prime offender.)    Well I have some good news for you:  Today, you’re entitled to say Shabbat Shalom even though it’s Wednesday. And in fact, every day for this entire year of 5782 you are entitled to say Shabbat Shalom --   (though truly, most people don’t). Because Jewish tradition defines this entire year that started yesterday as a Shabbat La-Aretz - a Shabbat for the land.  We are beginning what the Torah describes as a Shnat Shmitah - often referred to as a sabbatical year.     This Sabbatical Year
Post a Comment
Read more

By RS - September 09, 2021
The Hebrew and Yiddish writer and Zionist leader Shmaryahu Levin would tell a story of a transformative incident that took place when he was age 10, in Eastern Europe. He received a gift of his very own Shofar.  So as Rosh HaShanah approached, he was so excited to practice blowing the Shofar.  But try as he could, he just couldn’t get any sound out of it at all.  Each day, during the month of Elul leading up to Rosh HaShanah, he would spend at least an hour - holding his mouth in various positions, making various kinds of rude vibrating noises with his lips, trying to produce any sound with the Shofar.  But to no avail.  The day before Rosh HaShanah, as he was practicing outside his home, a Russian farmer came by.  “What’s that?”  So he explained it, and the farmer said, “Can I try?”  and he took the Shofar, held it up to his lips - and out came a Tekiah Gedolah that would be the envy of any Shofar-blower in the world.  And young Shmaryahu raced back to his teacher and choking back tea
1 comment
Read more 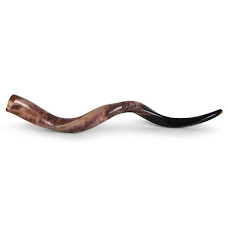 Question Marks for the New Year  (1st eve of Rosh HaShanah, 5782 / 2021) Let me tell you about the song I can’t get out of my head today as we begin the new year 5782.  Noting that it is, after all, the ‘80s:   years ago, back in the 1980s, there was a minor Israeli hit pop song that began with the words כל שנה מתחילה בסימן שאלה kol shanah mat’ h ilah be-siman she’elah , ‘every year begins with a question mark.’  but it rhymes in Hebrew.  Now there’s nothing earth-shattering about this insight.  Obviously we begin the new year with a question mark, because we begin the new year with uncertainty about the future. That has been a theme of new years since ancient times. Even the image of the book of life that is written on Rosh Hashanah and sealed on Yom Kippur affirms that we’re preoccupied at this time of year with uncertainty about what the coming year will bring.  New years always fill us with uncertainty, and that is probably what the writers of this Israeli pop song from the 1980s
Post a Comment
Read more
More posts