The Fruit That Remembers: What Botanists Say About the Etrog

The Etrog is undoubtedly one of the most unusual Jewish ceremonial objects. 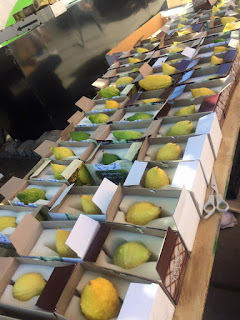 If you have spent some time with an Etrog, you know that it smells wonderful, it doesn't taste so great, and it looks like a mutant lemon, (usually) with a distinctive protrusion on one end.  It is one of the Arba Minim, the four kinds of plants that Jews use ceremonially during prayers on the holiday of Sukkot.

As I learn more about the Etrog, both Judaically and botanically, I realize what a powerful symbol it is for the Jewish people.


In English, an etrog is called a 'citron,' and it's a very early member of the citrus family.  According to many botanical scholars, it’s the very first citrus fruit to be cultivated.  In fact, almost all of the citrus fruits that we know of today - grapefruits, oranges, lemons, limes - are human creations, cultivated by crossing the four original citrus fruits (citron, mandarin, pomelo, and papeda) with each other.  This would indicate that not only is the etrog the relative of the lemon, lime, orange, and grapefruit, but the etrog is actually their ancestor.


(And from a more somber perspective:  those who theorize what would happen to our planet in the absence of human beings suggest that various cultivated plants would quickly revert to their original states, reversing the process of thousands of years of cultivation. If so, then an earth without humans would again be full of etrog trees.)

Like botanical historians, the architects of rabbinic literature also describe the etrog as one of the very earliest fruits with which human beings had contact.  When Adam and Eve were in the Garden of Eden, and the snake tells them to eat from the fruit of knowledge of good and evil, what kind of fruit was it?  The torah doesn't say - it just refers to it as a ‘pri,’ a ‘fruit.’  Christian folklore says it was an apple.  But Midrash Rabbah says it was an etrog tree. Both science and rabbinic literature agree that the etrog belongs in our very deepest antiquity.  So don’t ever call an etrog a mutant lemon, because - literally, truthfully - it’s the other way around: from a historical and scientific point of view, a lemon is actually a mutant etrog.
Interacting with the etrog sends us back to deepest antiquity, to the earliest years of human civilization on this planet.  It is a powerful symbol of the beginning of the Jewish year, when we seek to rewind, to turn back the clock, to be what we used to be and what we know we can be again.
What is most distinctive about the etrog is its protrusion, which some refer to as a ‘stem’ though it is clearly not a stem.  The stem, or oketz, is on the other side.  This protrusion is analogous to the little dot or speck you sometimes find on the bottom of a peach or a nectarine or orange.  In Hebrew, it’s called a pitom - though if you look very closely, you see that it is made of two distinct parts.  Rabbinic literature calls them the pitom (which is the wooden-looking part) and the shoshana (the flower).  If you look closely at the tip of an etrog, you can see a little dried-up flower - and this is what makes the etrog truly unusual.  (Not every etrog grows with a pitom, but most do.)

Like most fruits, every etrog began its life inside a flower.  Usually, as a fruit grows, the flower dies, and it either separates from the fruit, or dries up and falls off.  What is distinctive about the etrog is that it keeps the dried remains of its flower with it.  This makes the etrog a palpable symbol of the Jewish people, which does not forget where it came from.  It keeps the memory of its origins present all the time.  It doesn't ever cut itself off from its past; its past influences its present.

But of course the pitom is the most fragile part of the etrog.  Just a little bit of rough handling  and the pitom will fall off, rendering the etrog unfit for use.  Truly, it doesn’t take a lot for us to be severed from our memories of where we came from -- our memories of ourselves as individuals, and, for the Jewish people, our collective memories of our experiences throughout Jewish history.

There is one more way that the etrog, together with the palm and willow and myrtle branches, send us back to the past and to our early communal memories.  There are some places in the world where etrogs are plentiful.  But for most of the last millennium, the largest Jewish communities were in places where etrog trees (and palm trees and myrtle trees) were rare.

Picture a Jewish village in Poland or Russia 200 years ago.  Somehow, that Jewish community would figure out how to acquire these semi-tropical palm branches and Mediterranean etrogs and myrtles, and bring them to Poland and Russia.  Often, at great expense, entire villages would buy an etrog together that they would all share, taking turns using it, saying the blessings and marching with it.  (Jewish folklore is full of stories of mishaps involving the purchase, sharing and care of etrogs; the contemporary film Ushpizin pays homage to this folklore motif.)  The etrog and the other plants of the Four Species served as a reminder to these communities:  We may live here in Poland or Russia, but we are not from here.  We are from the place where these plants grow.  It served as yet another reminder to Jewish communities in the Diaspora of their ties to the land of Israel, and it is yet another way in which the etrog connects us to our deepest past.

When we hold the etrog on this Sukkot holiday, may it help us to contemplate and connect with our most distant past, and remind us to carry that past with us into the future.
Posted by RS at 5:21 AM