For the last several years, I have collected unusual Pesach stories, and shared three such stories with the community: two true stories, and one fictional story. Participants then have to guess which two stories are true and which one is false. (If you have listened to Wait, wait, don't tell me, you get the idea, except that only one story is false.) You can see previous editions of this game on my web site here http://rabbischeinberg.blogspot.com/search?q=trivia.

Here are the stories that I shared at our congregational seder last year. Answer (and relevant links) at the bottom. Feel free to use it if you wish!

American Jewish history is full of conflicts between Jewish tradition and sports. Hank Greenberg didn’t play in the World Series on Rosh HaShanah. Sandy Koufax didn’t play in the World Series on Yom Kippur. Many elementary school age kids get to relive these famous values clarification dilemmas on a weekly basis when soccer practice conflicts with Hebrew school. And for some University of Michigan fans I know, the 2018 Second Seder posed a real dilemma, with the Wolverines reaching the Final Four.

But… did you know about the Canadian version of this dilemma? Canada’s national sport, of course, is hockey. And before the lengthening of the NHL season, hockey fans often had to contend with the Stanley Cup playoffs or finals coinciding with the Passover Seders. 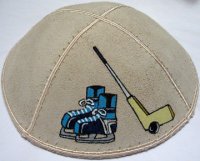 It was the Stanley Cup finals of 1953 which were the crescendo of this conflict between religion and sports.


The Toronto Maple Leafs were up against the Montreal Canadiens, meaning that most Jews in Canada were rooting for one team or the other. And Game 7 of that best-of-seven series was on the 2nd night of Passover. Many Jews from Toronto and Montreal have family stories about their relatives sneaking away from the seder to listen to the radio broadcast of the game in a different room.

What’s more, each team’s Jewish fans had a special reason to cheer for their team. For the Leafs, it was the fact that the team included Jewish goalie Ross Rosen -- affectionately known by his teammates as “Rosen the Chosen.” For the Canadiens, though, it was because their team included center and team leader Elijah Braniff. Braniff was not Jewish, but because his first name was Elijah, Jewish Montrealers began referring to the Stanley Cup as “Elijah’s Cup.” In fact, periodically throughout the series, the stadium would erupt with the cheer, “Elijah’s Cup! Elijah’s Cup! Elijah’s Cup!” - to the entertainment of the Jews from both sides.

But the Toronto Maple Leafs won the series, so Elijah’s fans didn’t get to see him drink from his cup that night --

which, come to think of it, means it was just like every seder night.


Two young rabbis arrived in the German city of Speyer (pronounced ‘SHPIE-er’) two days before Passover 2009, with the intention of making a community seder for the small but growing Speyer Jewish community.

They checked into their hotel suite and immediately got to work cleaning and kashering the kitchen for Passover, and then they cooked and prepared food and then celebrated two beautiful nights of seders on Wednesday and Thursday nights. They then settled in for what they hoped would be a relaxing Shabbat with the plans to leave on Sunday.

But on Shabbat, they got an ominous knock on the door. A German man who spoke no English was yelling at them - it seemed like he was telling them to get out. “We aren’t supposed to check out until tomorrow!” they kept on saying, to no avail. FInally, someone found a translator who clarified the problem. The hotel, apparently, had made an error and had booked the two rabbis for only 3 nights and not for 4 nights as they had requested. And the hotel was completely full. Despite all their protests, the rabbis were told they would have to leave.

The rabbis tried to argue for a while but eventually realized that it was futile. But they said: “You can throw us out of our room if you want, but we have a Jewish religious holiday today so we can’t help you remove anything, and we will have to stay on the premises until Shabbat is over.” The Hotel found that to be satisfactory - so the two rabbis sat in the courtyard of the hotel while the bewildered hotel staff peeled off the aluminum foil that was covering basically the entire kitchen, and removed all the matzah and parsley and horseradish and seder supplies, and brought it out next to where the rabbis were sitting in the courtyard.

But what the rabbis saw next was surprising and alarming -- numerous young men walked into the suite with shaved heads, bulging muscles, chains, and multiple tattoos and piercings -- apparently, that’s who the next guests were supposed to be.


Turns out, Speyer was the host of the annual Satanic Stomp music festival, and almost the entire hotel was booked by musicians and fans -- most of whom had reserved their rooms at least 6 months in advance. Which is how the two displaced rabbis came to spend their Shabbat afternoon in the courtyard together with dozens of members and fans of punk and goth bands including Mad Sin, Lucky Devils, and Coffin Nails. 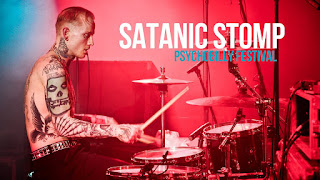 The rabbis said about this encounter: “It was the start of an interesting friendship.” The rabbis’ presence there certainly sparked curiosity and interesting discussions about Judaism and the Exodus. Presumably the Satanic Stomp fans particularly enjoyed learning about the Ten Plagues, especially the Wild Beasts and the Death of the First Born. The rabbis had to decline the offer to share the music fans’ beer, as beer is not kosher for Passover, but the rabbis were very happy to share their Passover wine. By the end of the evening, dozens of German punk and goth rockers had learned a new and very useful word: “L’chaim!”

Isn’t it strange how the Passover Seder, with all its noble ideas, concludes with Chad Gadya, a remarkably inane children’s song about how the fire burnt the stick that beat the dog that bit the cat that ate the goat that my father bought for two gold coins?

Well, Chad Gadya, the concluding song of the seder, apparently has been arousing strong feelings pro and con for several hundred years.

For example: a seder took place around the year 1770, somewhere in Italy or North Africa. And during the seder, one of the guests said something like: “Isn’t it strange how the Passover Seder, with all its noble ideas, concludes with Chad Gadya, a remarkably inane children’s song about how the fire burnt the stick that beat the dog that bit the cat that ate the goat that my father bought for two gold coins?” 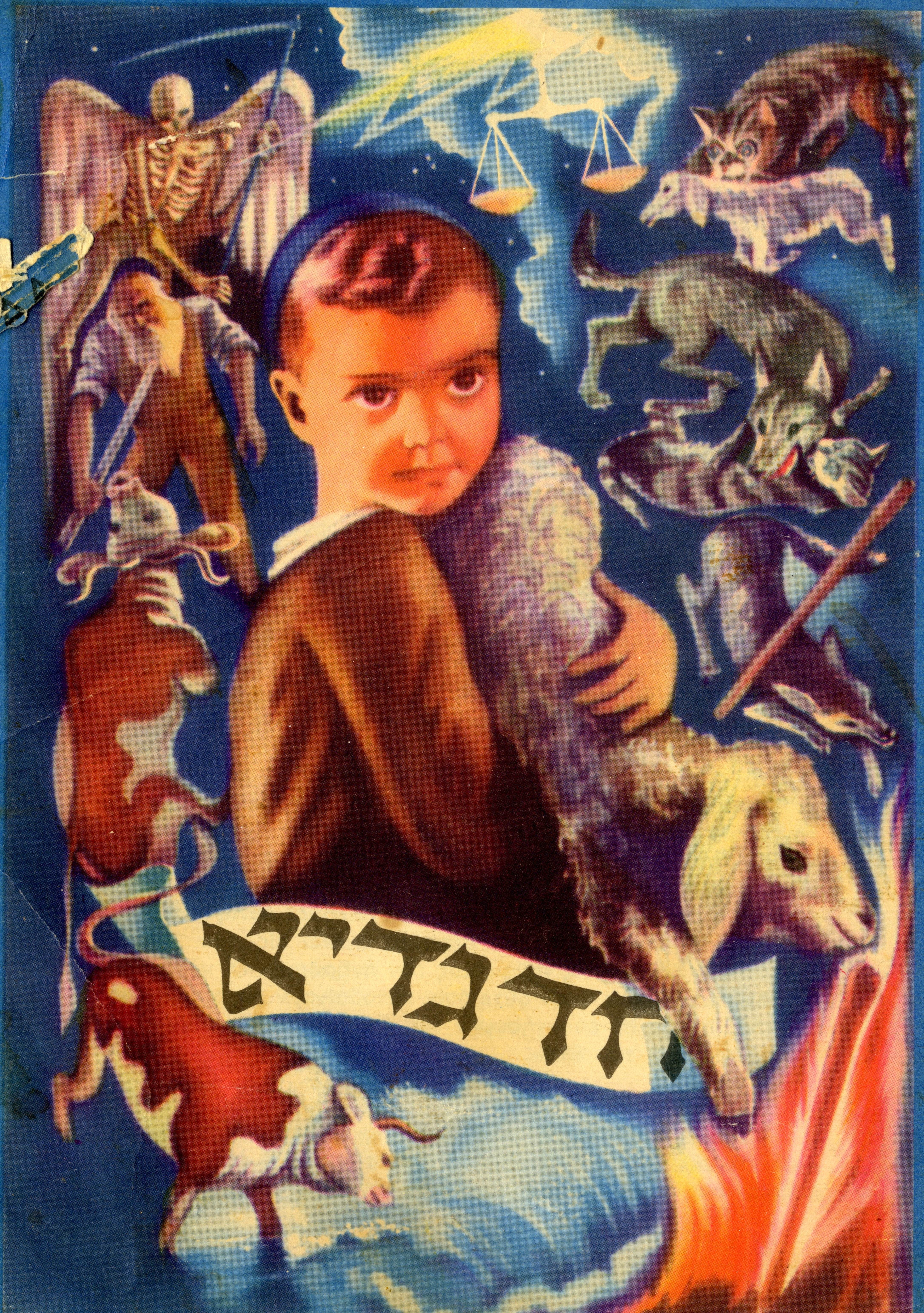 And another seder guest was so offended that that second guest stood up, pointed to the first guest, and said, “For your act of impudence and disparagement of a holy Jewish tradition, you are hereby excommunicated!”

Now this happened when excommunication was a big deal -- it meant that no one in the community was allowed to speak with the person or to do business with him. And so supporters of the man who had been excommunicated wrote a letter to the greatest rabbi of the region, Rabbi David Azoulay, with the hope that Rabbi Azoulay would say something like, “Don’t you guys have a sense of humor? Of course you shouldn’t excommunicate someone for making fun of Chad Gadya!”

However: Rabbi Azoulay answered: “That impudent man disparaged a deeply held custom of millions of pious and holy and learned Jews. He is indeed deserving of excommunication, without any doubt.” He then wrote a responsum, a Jewish legal opinion, about this.

By the way: to make sure no one misunderstands: I think I misspoke at the beginning of this story. What I MEANT to say was: “Isn’t it SO BEAUTIFUL AND HOLY how the Passover Seder, with all its noble ideas, concludes with Chad Gadya, a MASTERPIECE OF DIVINELY TRANSCENDENT POETRY about how the fire burnt the stick that beat the dog that bit the cat that ate the goat that my father bought for two gold coins?”


#1 is false. (Yes, the Stanley Cup sometimes used to overlap with Passover, but everything else about the 1953 Stanley Cup story is false.)

#3 is true -- see https://www.israelnationalnews.com/Articles/Article.aspx/7915, and for excerpts from the responsa of Rabbi David Azoulay (known by his acronym, חיד''א - 'Chida'), see http://notrikon.blogspot.com/2012/04/blog-post_05.html