Little known Hanukkah fact: In the original Yiddish version of the dreidel song, the dreidel is not made of clay, but of 'blai,' which is lead. Lead used to be the most popular material for making dreidels, before it was known how terribly toxic such dreidels would be. From an old guide to Hanukkah crafts, here are instructions for making a dreidel out of molten lead. But if you love your family, please make your dreidel out of clay or wood or plastic and not out of lead! 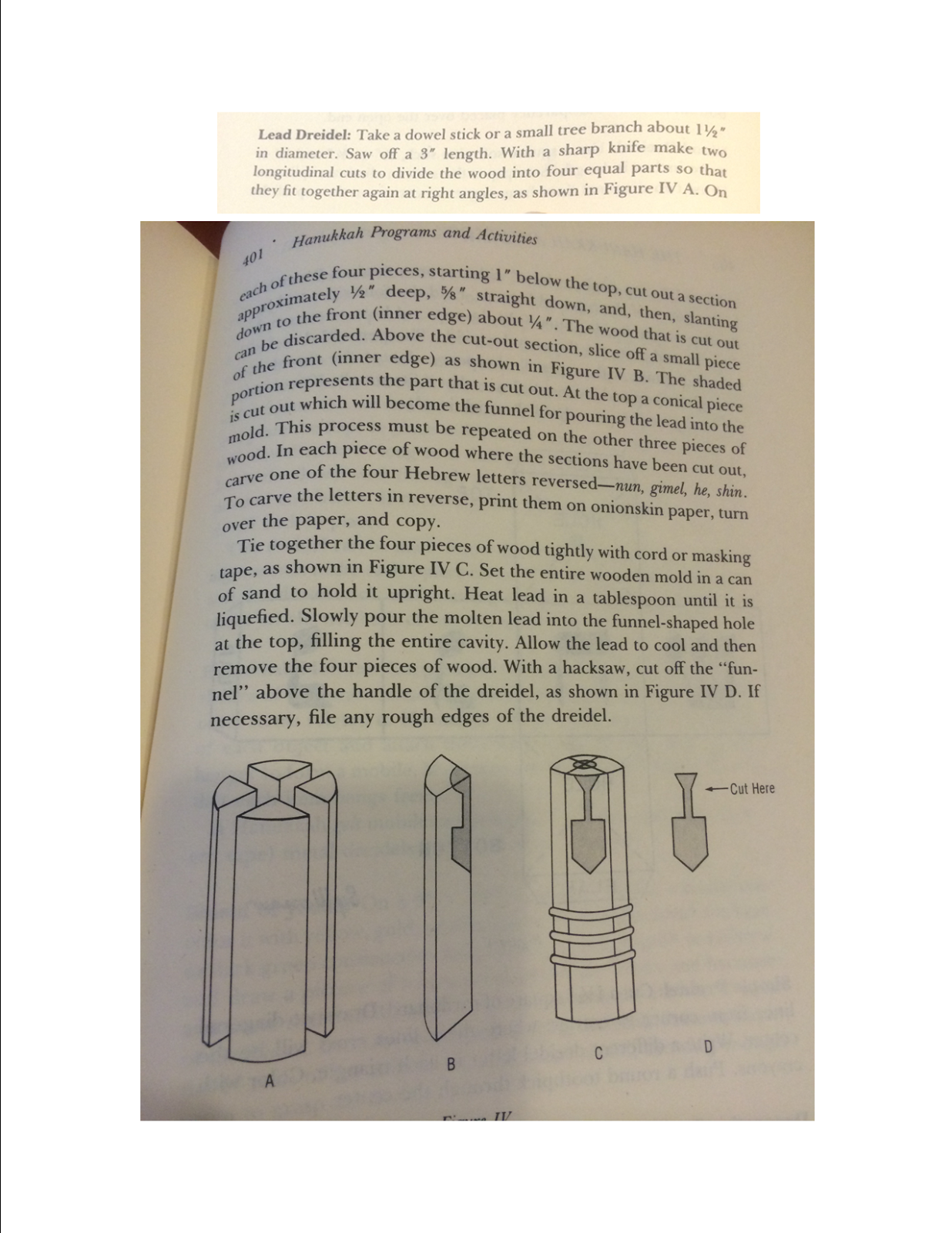 Posted by RS at 2:19 PM No comments: Links to this post

Thousands of years of long-lasting oil 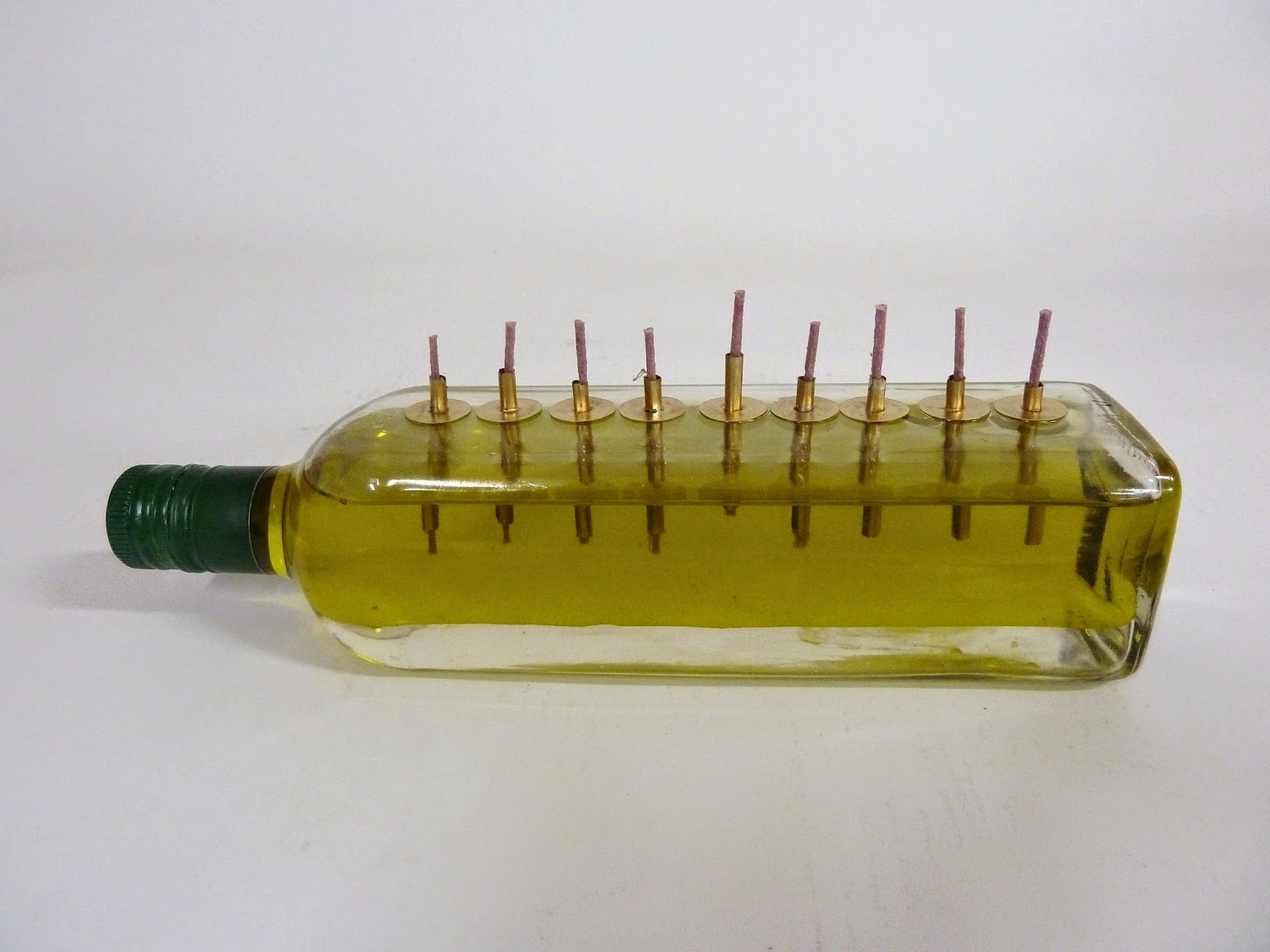 Everyone knows the Hanukkah story about a little bit of oil lasting for eight days.  But not everyone realizes that this was not actually the first story in Jewish tradition about miraculously long-lasting oil.

Earlier this fall, we and communities around the world read a passage from the book of Kings, the Haftarah for Parashat Vayera, which is about miracles performed by the Prophet Elisha, the protege of Elijah the Prophet.

One of these stories (2 Kings 4) describes a woman who approaches Elisha and tells him:  I am in dire financial straits; my husband is dead and we are in terrible debt; our creditors now want to seize my two children as slaves.


Elisha asks her: “What do you have at home?”  She responds:  “We have nothing at all at home, except for a jar of oil.”  Elisha tells her to borrow jugs and vessels from all her neighbors and then to pour oil out of this jar that she has, into the borrowed vessels.  Miraculously, this jar of oil keeps on pouring.  It fills up all the jars that anyone has in the entire neighborhood.  She then sells the oil, pays off her creditors and is able to live in more comfortable circumstances.

Take a moment to recall the first time you heard about the miracle of the oil on Hanukkah. Technically speaking, how did it happen?  I had always imagined that they poured whatever oil they had into the cups of the menorah, and that the flames just continued to burn.  But interestingly, the passage in the Talmud that tells us about the miracle of the oil (Shabbat 21b) does not say this explicitly.  Rather, it says: The Greeks had defiled all the oil they could find in the Temple.  After the victory of the Hasmoeans (the Maccabees), “they found only one jar of oil with the seal of the High Priest [indicating that the oil was still pure and had not been defiled], and it had only enough oil to light for one day.  Na’asah bo nes ve-hidliku mimenu shmonah yamim.  A miracle happened with it, and they lit from it for 8 days.”   This sounds like this is not the miracle of long-burning oil, but the miracle of an apparently bottomless jar of oil, similar to what we read about in the book of Kings.  It sounds like every day they took the jar and poured oil from it into the cups of the menorah, and the oil burned at normal speed, but there was just much more of it because they were able to continually pour oil out from it.


This image of a bottomless jar of oil can be a poignant symbol for us today.  A few years ago, we invited Jewish environmental leader Nigel Savage, founder of the Jewish environmental organization Hazon (www.hazon.org), to speak at our synagogue.  He noted that it is not surprising that Jews are at the forefront of the contemporary environmental movement, because so many Jewish symbols are connected to the notion of sustainability.  God appears to Moses in the book of Exodus as a ‘bush that was not consumed’ - the ever-renewable resource.  And the miracle of Hanukkah is a miracle of oil that lasts for eight times as long as expected.  Many of us, for most of our lifetimes, have lived as if the quantity of oil in our world is unlimited, and our capacity to burn is also essentially unlimited.  But more recently, we have come to truly understand that the quantity of fossil fuel is less than we had thought - and of more immediate concern, that the capacity of the environment to bear our use of it is also less than we had thought.

We sometimes think of environmental awareness as something that emerged in the modern era, something of which our ancestors were unaware.  But there are plenty of passages in the Talmud and other early Jewish literature about the importance of conserving our resources.  For example,  a passage in the Babylonian Talmud (Shabbat 67b) tells us that one who covers an oil lamp, or uncovers a naphta lamp -- in either case, causing the fuel to be burned up more quickly and being less energy-efficient - has violated the laws forbidding causeless destruction.


Sometimes scarcity is what causes us to be most creative in the use of the resources we have. It is no wonder that Israel, with relatively little fossil fuel, has become an international leader in the use of solar energy, the ultimate renewable resource.

This year, our congregation has demonstrated our commitment to environmental awareness and environmental responsibility by being part of the Greenfaith Certification Program, a program for congregations of diverse faiths that seek to express a commitment to the protection of our environment. Our congregation strives to incorporate environmental consciousness in all of our activities and decisions, from our decisions about school and office supplies, to our building maintenance and renovation decisions, to our use of energy and natural resources.  We look forward to being ever more thoughtful about our community’s environmental impact and the messages we transmit about the environment to children and adults.  And this Hanukkah, we hope to get in touch with the stories of our ancestors as we seek to get maximum use out of our every drop of precious oil.
Posted by RS at 11:46 AM No comments: Links to this post

Shammai and Hillel fight it out: How should we light the Hanukkah candles?

How was it decided that we should light one candle on the first night of Hanukkah? In this audio message, join me in going back in history to listen to the debate between the ancient rabbis Hillel and Shammai about how best to mark the Hanukkah miracle, and how best to face the challenges of the future.  Chag Urim Sameach - best wishes for a happy Hanukkah holiday!

Posted by RS at 3:51 PM No comments: Links to this post