Yanny and Laurel on the Israeli-Palestinian Conflict

Is the voice actually saying “Yanny” or “Laurel”? Like so much else in the world, it depends on your prior context and what you are primed to hear -- and it also depends on what audio frequencies you are hearing most strongly. Thanks to a quirk of audio processing, the higher frequencies in this audio clip incline a person to hear the voice saying “Yanny,” while the lower frequencies make a person more likely to hear “Laurel.” And a particular person’s balance of low and high frequencies will be determined by various factors, including the audio equipment one is using, the quality of one’s hearing, and one’s psychological expectations. Two people can listen to the exact same voice at the same time and hear that voice saying different words. (There is even a tool that one can use to adjust the frequencies to make it more likely that one will hear one word or the other.)

Throughout this week, my thoughts have been turned to Israel and Gaza. I realize that discussing this conflict in the same breath as an internet meme runs the risk of trivializing this weighty and tragic situation, which is the last thing I would want to do. And yet I see the ambiguous computerized voice as a powerful metaphor for different understandings of the intractable conflict between Israelis and Palestinians, including different understandings of this week’s events.

One of the characteristics of the Yanny/Laurel voice is that people who hear one of the two words are often incredulous that anyone could possibly hear the other word. And yet, over time, it is possible for a listener to stretch oneself and even to force oneself to hear the other word - or at least to concede that hearing the other word is plausible.


Even the mere suggestion that the Israeli-Palestinian conflict could be similar will, I am sure, prompt outrage. Many supporters of Israel, in Israel or throughout the world, will find it absurd that anyone could possibly and genuinely take the side of the Palestinians in this or any other dispute, when Israel so clearly holds the moral high ground. And similarly, for many supporters of the Palestinians, the justice of that cause is so abundantly clear that anyone who supports the Israelis in this struggle is obviously operating under political and/or religious delusions.

My own perspective on this conflict does not simply split the difference. I align myself with Israel.  While I have my critiques of various Israeli policy decisions, I strongly support the right of Israel to exist and to defend itself.  (Ultimately, I hope and pray for a future in which everyone in the region can live in peace and security with their human rights and national rights respected - ideally in a two-state solution, as remote as that dream may seem now.)  I recognize, though, that those who disagree with me on anything I have said above are not delusional; rather, they are focusing on a different blend of frequencies from the ones I am focused on, whether because they are getting their news from different sources from me, or they are emphasizing different aspects of the situation and de-emphasizing other aspects, or because they (like me) are primed to hear what they expect to hear.

Some would say that in an intractable conflict like the Israeli-Palestinian conflict, it is a sign of weakness and disloyalty to even consider the perspective of the other side. (I am confident that this post will attract angry comments from both left and right, saying exactly this and proving my point.) But I side with those who say that understanding the narratives of the other is a sign of strength, not of weakness. I appreciate what I have learned from some inspiring teachers - including Rabbi Hanan Schlesinger, Antwan Saca and Ali Abu Awwad of Roots/Shorashim/Judur, as well as Yossi Klein Halevi and Imam Abdullah Antepli of the Hartman Institute. All these teachers have taught me that growing towards peace involves a confrontation with the perspectives with which we may feel primed to disagree, and a recognition of the data points that we may feel inclined to dismiss. 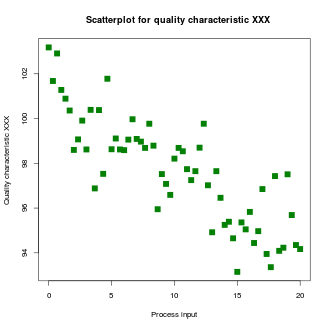 Supporters of the Palestinians, for example, will focus on the fact that the recent protests at the Gaza border began as grassroots, non-violent protests, and the overwhelming majority of those who have participated -- including some of those who have lost their lives -- have not ever engaged in attempted acts of violence against Israel. And supporters of Israel will note that Hamas has encouraged and funded these protests, which have included acts of violence, including armed people trying to cross the border with the express aim, by their own admission, to commit acts of violence and even murder of Israeli civilians. Supporters of the Palestinians will note the egregious living conditions in Gaza, with the poverty and hopelessness that has inclined so many residents towards suicidal acts. Supporters of Israel will note, however, that this zeal is also fomented by the religious and political ideology of Gaza’s Hamas leaders, who share in the responsibility for the desperation of Gaza’s residents. (This article catalogues 13 “inconvenient truths” about the Israel/Gaza conflict and is sure to include at least one detail to make every person uncomfortable.) Supporters of Palestinians will be inclined to blame the collapse of the peace process on Israeli settlement building, while supporters of Israel will be inclined to blame this collapse on Palestinian terrorism and lack of Palestinian acceptance of the legitimacy of any Jewish presence in the Middle East. And so it is with every aspect of this complex and painful conflict: Of the wide array of data points, each side focuses on the data points that best support its own position, and each side seeks to deemphasize the strongest data points of the other side. This is the strategy that is usually employed by both sides when debating the Israeli-Palestinian conflict.

But maybe the problem is that “debate” is the frame we often use to discuss these issues. There is another way, which is to embrace dialogue rather than debate. Unlike a debating strategy, where the goal is to emphasize one’s own strongest points and ignore or discredit the strongest points of one’s opponent, the goal in a dialogue is to listen to and understand the other side. In a dialogue, encountering and listening to the other is not a sign of disloyalty but is a sign of strength. Debaters seek to simplify the situations they discuss, while those who dialogue are comfortable to understand their complexity -- and since the situations are truly complex rather than simple, those who engage in dialogue are coming to a fuller and truer understanding. Debating opponents often walk away feeling dismissed and devalued; dialogue partners ideally walk away feeling heard, their humanity affirmed.

I find it so sad when some people refuse to ‘normalize’ their adversaries, refusing to listen to them or dialogue with them. There may be a time to use such an intellectual boycott tactic, but hopefully only for adversaries of the very most heinous variety. I side with the interfaith activist and writer Eboo Patel: I want to exclude the smallest number of people from my potential circle of dialogue partners. 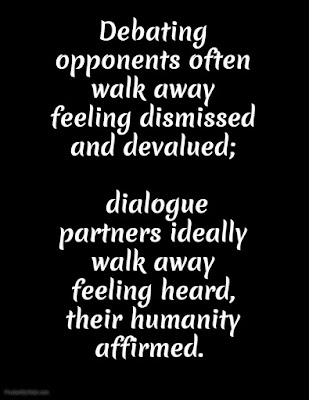 There remains a role for both debate and dialogue, and dialogue cannot solve all problems. Many people are jaded or stung by unsatisfying dialogue experiences they have had, which sometimes disinclines them from engaging in dialogue again. But those who are hoping that the Israeli/Palestinian conflict will be solved by the complete defeat and capitulation of one of the sides are mistaken. Whatever a better future for the people of the region will be, it will demand a higher level of mutual listening and mutual understanding - by Israelis and Palestinians, and by their advocates around the world.
Posted by Rabbi Robert at 9:13 AM 2 comments: Links to this post