What did you learn at Jewish summer camp? (Parashat Va-et'hanan)

I returned home this week after spending a few weeks as a Jewish educator and rabbinic resource at Camp Ramah in the Berkshires. And greeting me on my return is the Torah portion of Va'ethanan, which reminds me of some of the value of learning about Judaism at summer camp.

The Torah portion of Vaethanan has been described as the 'greatest hits collection' of the torah.  This torah portion includes numerous well-known passages including the second retelling of the ten commandments, and verses quoted in the Torah service and in Aleinu.   But most famous of all is the Shema, which affirms our belief in one God and our commitment to perform various mitzvot as a way to keep this central teaching at the forefront of our minds. 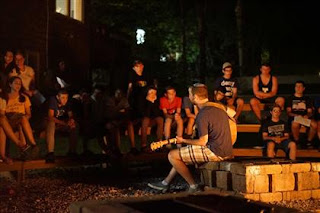 One of the Hasidic masters, Menachem Mendel of Kotzk, made a perceptive comment about one verse in this paragraph, that reminds us of an element of the core mission of Jewish learning in a summer camp context. The verse says, 'vehayu hadevarim ha'eleh, asher anochi metzav'cha hayom, al levavecha.'   “These words that I command you this day shall be upon your heart.”

The Kotzker Rebbe noted the unusual construction in this verse: let these words be 'upon' your heart. Wouldn't we have expected that the words would actually be 'in' our hearts rather than simply 'upon' them?

I see two applications of this teaching to Jewish education at a Jewish summer camp like Camp Ramah.  Many of the campers learn about Jewish tradition intensively during the year in their schools and synagogues and at home. But it is at camp that they live in a Jewish communal environment and they experience Judaism as the normative basis for the community. For many campers and staff members, camp is as close as we come (outside of Israel) to experiencing Jewish tradition on its 'home turf,' as it were. For many of us, camp is where we learn the value of an entire community observing shabbat, or where we learn to interact Jewishly with the beauty of the natural world.  And as a result, for many campers (and staff members), it is at camp that our hearts are most truly 'open' to more fully incorporate the Jewish teachings we have learned over the years.

And similarly, there are insights that our campers learn at camp that truly enter their hearts at other times, later on in their lives when their hearts are open to those teachings.  As a Ramah camper for many years, I learned so much about Jewish tradition, Jewish life, the Torah and Israel, and periodically even today I realize that these teachings are still entering my heart, as I undergo new life experiences that cause me to think again about what I learned at camp.

As the summer draws towards its conclusion, I pray that the hearts of the campers I worked with (and all those who attended Jewish summer camp this summer) will be open to Jewish teachings in new ways as a result of their camp experience. But we know that the true and full impact of this summer will be felt only in the future, as their hearts grow ever more open, as they gradually understand more fully what they have experienced this summer.
Posted by RS at 8:57 AM No comments: Links to this post