This sermon was delivered on the first day of Rosh haShanah, 5775 (2014), at the United Synagogue of Hoboken, New Jersey.

When Naftali Hertz Imber opened up the newspaper, he could not believe what he was reading.

As he sat there that day in 1878, in the city of Iasi, in Romania, he saw a small item in a Jewish newspaper that said that for the first time in hundreds of years, there were to be Jewish farmers farming the land of Israel.

Imber, a Jewish poet in his early 20’s, had many reasons to be surprised by this news.  The Jewish communities that he knew, in Eastern Europe, were mostly poor - some were urban, some were rural, but virtually none of the Jews were farming the land, as Jews were generally not permitted to own land.  No matter how many years or decades or centuries their families had dwelled in an Eastern European village or region, they were still regarded as foreigners, people who really belonged somewhere else, living on land that belonged to others.  Sometimes they got along well with their neighbors, and sometimes not.  They often had to cope with anti-Jewish attitudes and even anti-Jewish violence.  Even in the best of times, they often felt like they were walking a tightrope.  Even many of those who tried to shed their Jewish identities and to blend in to the surrounding society were unable to do so.  In that era, the Jewish holiday that best summed up the existential state of the Jewish people around the world was the fast day of Tisha B’Av, the 9th of Av, the day that commemorates the exile of Jews from the land of Israel -- their transformation from a people living in its own land, to a people living as a beleaguered minority everywhere.

Imber also knew something about the Jewish community in Eretz Yisrael, in Palestine of that time.  It was a mostly urban community, in Jerusalem and a handful of other cities, and mostly impoverished, living at the mercy of the Ottoman Empire.   It was quite a religious community, with a disproportionate number of elderly Jews from around the world who had migrated to the land of Israel at an advanced age so that they could at least return to die there.  And the community would not have been able to sustain itself financially were it not for the charity they received from Jews around the world.  It was no less precarious an existence as Jews had in Eastern Europe.  The city gates of Jerusalem were locked up each night, and woe to any Jew who missed the curfew and was locked out of the city and at risk of bandits or worse.
And yet, as Imber read in his newspaper, a group of  young Jews from Jerusalem in the mid-1870’s developed this crazy idea:  we should move outside of Jerusalem.  We should purchase some land, we should start farming the land, the way our ancestors did thousands of years ago.  And this will be our first step towards economic self-sufficiency, and a first step towards regaining our people’s dignity.  Despised and powerless throughout most of the world, regarded as foreigners almost everywhere -- this land, the land of Israel, should be one place where we are not regarded as foreigners, and where we can re-establish our bond with the land that is our heritage.

And Naftali Hertz Imber read that they had purchased some land not far from the Mediterranean sea, to establish an agricultural community to be called “Petach Tikvah” -- which could be translated as ‘An Opening to Hope,’ or ‘The Door to Hope.’ And Naftali Hertz Imber was transfixed - by the idea of the Jewish community’s commitment to transform and revive itself, and by the name of this community: Petach Tikvah, the Door to Hope.

And he responded the way you would expect a young poet to respond to an event that moved him deeply.  he wrote a poem, called “Tikvateinu," meaning ‘our hope.’   It was a long poem with 9 stanzas and a refrain.  Decades later, it would be set to music.  And I invite you now to listen, as the choir sings one of its less familiar stanzas:
'For as long as tears continue to flow from our eyes like generous rain,
and for as long as countless of our fellow men and women visit the graves of our ancestors,
Then our hope is not yet lost - the ancient hope -
that we will return to the land of our ancestors, to the city where David encamped.’

Each stanza of the poem ‘Tikvateinu’ pointed out some way that the Jewish people had maintained their connection to the land of Israel throughout 2000 years of exile.  Facing Jerusalem in prayer. Reciting mournful midnight prayers for Jerusalem’s welfare. Mourning on the fast day of the 9th of Av.  Recalling the exile and praying for redemption.  For as long as we do all these things, then עוד לא אבדה תקוותינו - od lo avdah tikvateinu, our hope is not yet lost. 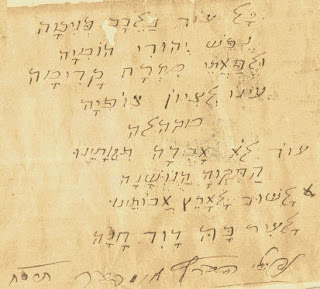 By now you realize that I’ve been sharing with you the history of Israel’s national anthem, Hatikvah -the Hope.  But this was still long long before anyone thought it would ever be the anthem of anything.  (Or that there would ever be anything that it could be the anthem of.)   It was just a poem expressing a yearning for a land, for a home -- and noting the persistence of a tikvah, a hope, that the Jewish people’s

Read more »
Posted by RS at 5:30 AM No comments: Links to this post