At our synagogue's congregational seders for the last few years, we have played the following game:  I have collected unusual Pesach stories, and shared three such stories with the community:  two true stories, and one fictional story.  Participants then have to guess which two stories are true and which one is false.   (If you listen to Wait, wait, don't tell me, you get the idea, except that only one story is false.)
You can find previous years' stories here, here, here and here.The stories from our 2014/5774 seder are below.  Three unusual Pesach stories..... 2 are true, and one is fictional.  Can you figure out which story is not true?   (The answer is at the bottom.) (a) 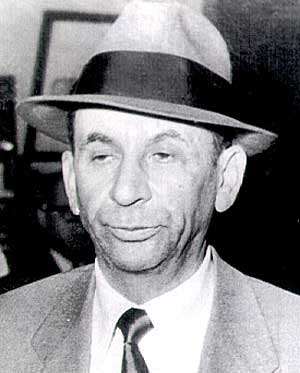 One of the most notorious Jewish gangsters was Meyer Lansky.  Born in Russia in 1903, Lansky immigrated to New York as a boy and had become a crime boss by the time he was a teenager - engaging in bootlegging, gambling, theft and extortion, and the occasional murder.  Lansky was portrayed by Ben Kingsley in the 1991 film Bugsy, and he was the inspiration for the character of Hyman Roth in the film The Godfather Part II.

The biographer Robert Lacey interviewed Lansky’s cousin, Izzy Lansky, to gain some insights into Lansky’s Lower East Side childhood and when his criminal tendencies first surfaced.  Izzy said, “Actually, my first memory of my cousin was an incident of extortion, that happened at a Passover seder when I was about seven years old.  Meyer had found the afikoman, and everyone knew that the going rate for an afikoman in those days was about 25 cents.   But when my uncle went to hand him a quarter, Meyer threatened to smash the afikoman unless he got a full dollar - and a dollar he got.  I never saw anything like it before.”


That’s a nice afikoman you got there.  It would be a shame if anything ….happened to it.

Last March, a prominent Egyptian journalist and columnist wrote that Egypt should file suit against Israel - for damage suffered during the Ten Plagues.

Ahmad Al Gamal, writing in the Egyptian newspaper Al Masri Al Yawm, wrote: “We want compensation for the Ten Plagues that were inflicted upon us as a result of the curses that the Jews' ancient forefathers cast upon our ancient forefathers, who did not deserve to pay for the mistake that Egypt's ruler at the time, Pharaoh as the Torah calls him, committed.”...it was Pharaoh who oppressed the Children of Israel, rather than the Egyptian people,” Al Gamal stresses.

Al Gamal added, “We want compensation for the gold, silver, copper, precious stones, fabrics, hides and lumber, and for all animal meat, hair, hides and wool….All these are materials that the Jews used in their rituals. These are resources that cannot be found among desert wanderers unless they took them before their departure.”

Interestingly enough, Ahmad Al Gamal was not the first contemporary Egyptian to demand compensation from the Jewish people for Exodus-related expenses.   In 2003, the newspaper Al Ahram Al Arabi reported that Dr. Nabil Hilmi, Dean of the Faculty of Law at the University of Al Zaqaziq, attempted to prepare a lawsuit against Israel and world Jewry for the jewels that the ancient Israelites took with them during their exodus out of Egypt.

What’s also amazing is that the Talmud includes a story remarkably similar to this.  The Jews’ response was to countersue the Egyptians for back wages for 600,000 people over the course of 400 years of slavery - plus accumulated interest.  I think the case will be dismissed.

(3)
Every year the number of products that you can find that are certified kosher for Passover keeps on increasing.  Wasabi.  Panko crumbs. Habanero pepper sauce.
But one of the newest kosher for passover items, spotted at the Saks Fifth Avenue in Paramus NJ, is - Kosher for Passover men’s suits.The store has a rack that is labeled ‘Kosher for Passover’ - and on the rack are Italian and French suits that cost upwards of $1000, each one of which is marked “Kosher for Passover.”

Why? - theories abound, and people who work in the store didn’t necessarily know.  Cereal fibers in the lining?  Oatmeal rinses to keep the wool looking young and vibrant?
It appears that the real answer is that first of all, these suits do not violate the laws against mixtures of wool and linen; and second, the pockets have already been checked to ensure they have no hametz (leavened products) in them so the new buyer can buy the suit and wear it on Pesach without worrying about checking the pockets for Hametz.
Then again, even if the suits were edible, they probably would not taste much worse than Shmurah Matzah.  And pound for pound, they’re probably cheaper than Shmurah Matzah.