On the Liturgy of Tisha B'Av

Here's a link to the essay on the liturgy of Tisha B'Av that I wrote for the Rabbinical Assembly's Tisha B'Av and Kinot volume.

http://www.rabbinicalassembly.org/sites/default/files/public/publications/tishah-bav/liturgy-tishah-bav.pdf
Posted by RS at 9:19 AM No comments: Links to this post


My synagogue owns a set of huge mahzorim – prayerbooks for Jewish holidays – that was printed in Lithuania in 1914.

I like to look at these books every year as July 4 approaches.  I carefully turn their yellowed, crumbling pages until I get to the Prayer for the Government, recited shortly after the reading of the Torah and Haftarah.  And in this prayerbook, the prayer reads:

TRANSLATION:
May He Who grants salvation to kings and dominion to rulers,
Whose kingdom is a kingdom spanning all eternity,
Who releases David, his servant, from the evil sword,
Who places a road in the sea and a path in the mighty waters –
May He bless, protect, guard, assist, elevate, exalt, and lift upwards
Our master CZAR NIKOLAI ALEXANDROVICH,
With his wife, the honorable CZARINA ALEXANDRA FEODOROVNA
Their son, the crown prince ALEXI NIKOLAIOVICH
And his mother, the honorable CZARINA MARIA FEODORAVNA
And the entire house of our king, may their glory be exalted.
May the King of kings in His mercy give him life, and protect him,
And save him from every trouble, woe and injury.
May nations submit under his feet, and may his enemies fall before him,
And may he succeed in whatever he endeavors.
May the King of kings, in His mercy, grant compassion in his heart
and the heart of all his advisors
To do favors for us and for all Israel, our brethren.
In his days and in our days, may Judah be saved, and may Israel dwell securely,
And may the Redeemer come to Zion.
So may it be His will – and we say:  AMEN.

This prayer is so strange as to be almost comical.   You remember in Fiddler on the Roof, when someone asks the rabbi, “Is there a blessing for the Czar?”  He responds:  “A blessing for the Czar?  Of course – may God bless and keep the Czar …. Far away from us!”  And in fact, there IS a prayer for the Czar, or whoever the ruler happened to be, in traditional siddurim.  Over the course of five centuries, hundreds of prayerbooks have included a version of the prayer above, with the name of the current leader inserted.

Why did Jews say prayers like this?  One objective could have been to curry favor with the king.  Jews tended to rely upon the king to ensure their safety, and in fact, Jews tended to fare better in places where the king was strong.  So this could have been a prayer uttered in sincerity:  a strong king, even a moderately anti-Jewish one, was better for the Jews than a weak king who would be overcome by the raging mob.

But most observers understand prayers like this as examples of the political use of liturgy, rather than as authentic expressions of religious devotion.  The prayer is recited, and printed in the prayerbook, simply to ensure that no one could accuse the Jews of disloyalty.  Stringing together so many synonyms -- “may He bless, safeguard, preserve, help, exalt, make great, extol, and raise high…” -- makes it sound like the community is trying to make a point, rather than simply praising someone they genuinely want to praise.  It is hard to imagine that Jewish communities that had been terrorized by Czar Nicholas II and the previous Czars would have prayed without irony, “May his enemies fall before him.”  After all, who were those enemies?!   But no matter how cruelly they were mistreated, they still needed to create an illusion of respect for the authorities.

One line towards the end of the prayer, however, appears to be an utterly serious plea: “May the King of kings, in His mercy, grant compassion in his heart and the heart of all his advisors to do favors [or ‘acts of goodness’] for us and for all Israel, our brethren.”    Knowing that this supremely powerful monarch could essentially do as he wished with the Jewish people, the only hope for the Jewish community was to pray for him to be compassionate.  The fate of the Jewish community depended not upon “rights,” but upon the “tovot” – “favors” that the ruling authorities could choose to grant to them.

This prayer summed up the relationship between Jewish communities and the non-Jewish authorities quite well, for hundreds of years.  But in the second half of the 18th century, the situation began to change.  The change came first in French synagogues, where some communities began, after the French Revolution and the emancipation of the Jewish community, to recite a new form of the Prayer for the Government that was not focused on the King as an individual.

But it was in the United States that many Jews came to realize that their assumptions about their relationship with the government needed to be thoroughly revised.  We see evidence of these revisions in prayer customs and prayerbooks almost immediately after American independence.

The Jewish community in Colonial America was tiny.  In the New York area, the only synagogue was Shearith Israel – the Spanish and Portuguese Synagogue.  Thankfully, that community, which still exists today, preserved very good records of their liturgical practice.  Soon after the Declaration of Independence in 1776, there was a change in liturgical practice at Shearith Israel.  While they did not change the text of the prayer for the government, they decided that henceforth, instead of standing up for that prayer, now they would sit down.  This itself communicates a difference about the model of government and the Jewish relationship to power:  In the new United States, Jews can respect the government without having to resort to flattery of its leaders.[1]

Another early American siddur, written by Solomon Henry Jackson in 1826, contains two different versions of the prayer:  one version for when Congress is in session, and a different version for when Congress is on recess.  The difference is, when Congress is in recess, they aren’t your leaders, so there’s no reason to pray for them.  This could be understood as an additional demonstration of a non-hierarchical and non-deferential relationship with the ruling authorities.  Additionally, the Jackson siddur version includes a line blessing “the people.”  What had always been a prayer for the King and a prayer for the Government was now being transformed into a prayer for the Country.


While there have been multiple versions of the Prayer for the Government in American siddurim, one version that has stood the test of time and has actually been reproduced, very close to the original, in every official Conservative and Reconstructionist prayerbook for the past 85 years.  This is the prayer by Rabbi Louis Ginzberg of the Jewish Theological Seminary, composed back in 1927 for the Fesival Prayer Book, the first liturgical publication of the Conservative Movement.

Ginzberg’s prayer reflects a growing realization that the United States is a different kind of Diaspora.  The leaders of the United States were not rulers to be feared.  Jews in the United States were not an oppressed and barely tolerated minority.   Rather, Jews were invited to be full partners in this society, to come to the table to help to make decisions, to shape its policy, and culture, and values.  In the United States, Jews do not need to pray merely that the rulers will show fairness and compassion to the Jews.  Rather, a prayer for the United States should convey that this is a society of which the Jewish community is an integral and valued part, and that this society upholds – at least in theory, and often in practice – values that we passionately uphold, such as liberty for all people, and tolerance of dissent.  The overwhelming agenda of Rabbi Ginzberg’s prayer is to show that the United States is made up of diverse ethnicities and religions, and to pray that these different races and creeds will get along and establish a society based on tolerance and freedom.

This country has numerous imperfections.  We continually strive to make it ever more just and ever more equal.  But sometimes it takes a glance at a siddur from 1914 to remind me just how different, just how unprecedented, the American Jewish experience has been in the sweep of Jewish history, and how gratefully I ask for God's blessings for this country. 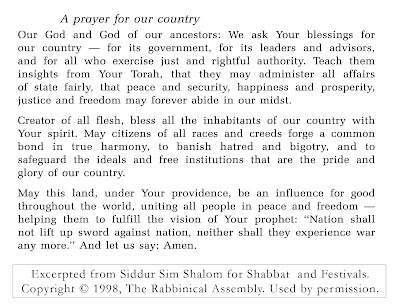 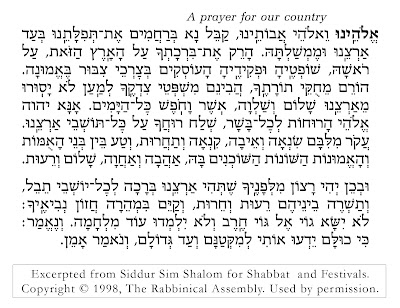 [1] Jonathan Sarna, “Jewish Prayers for the U.S. Government: A Study in the Liturgy of Politics and the Politics of Liturgy,” in Karen Halttunen and Lewis Perry, ed., Moral Problems In American Life:  New Perspectives On Cultural History (Cornell University Press, 1998),  p. 206.
Posted by RS at 9:53 AM 2 comments: Links to this post