You can see previous editions of this game here http://rabbischeinberg.blogspot.com/search?q=trivia.

This is what was presented at our congregational seder in 2017.  2 are true; one is fictional. Answers at the bottom! 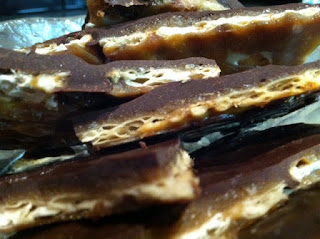 These cookies, made from matzo coated in caramel made of butter and brown sugar, topped with melted chocolate and then refrigerated, are easy to make and also so addictive that in some circles they are known simply as ‘matzo crack.’

You may have thought that you remember this recipe from your grandparents who brought it with them to Ellis Island … but food writer and pastry chef Marcy Goldman has done some research on this Passover tradition, and her research reflects that this recipe was invented by one specific person -- food writer and pastry chef Marcy Goldman. She says she developed this recipe in 1985, she says she can prove it, and it’s time for her to start getting credit for it.
So when the Manischewitz Food Co  put a recipe for Matzo Toffee Crunch on its matzo boxes, she asked that they indicate that she was the original inventor of this recipe.  They declined, noting that recipes can’t be copyrighted.

But increasingly Marcy Goldman has been getting appropriate credit for the invention of this recipe, the first truly new food to truly break into the pantheon of Passover classic dishes in many decades -- even though it might be better not be known a the inventor of ‘matzo crack.’
B.
The seder plate is getting crowded.  Along with the traditional shank bone and egg and parsley, some Jews have had the tradition for the last 30 years to add an orange to the seder plate - in solidarity with Jewish women, or with the Jewish LGBT community, depending on whose version of the story you believe.  More recently, advocates for farm workers have suggested putting a tomato on the seder plate.  Advocates for Israeli-Palestinian coexistence have encouraged putting olives on the seder plate. And Reconstructionist Judaism has encouraged adding a pineapple to the seder plate as a symbol for refugees.

But as of last week, the newest addition to the seder plate is an unbroken apple peel - to express solidarity with the millions of people around the world, and thousands and thousands of Jews, who are left-handed.   That’s according to Joel-Aaron Levine, the founder of “Left-Handers Anonymous,” as well as the moderator of its “Jewish Left-Handers” Facebook page.  According to Levine, this is the way that attention can be drawn to the daily indignities suffered by people who are left-handed, who find that desks, musical instruments, the computer mouse, and especially kitchen utensils were not designed with them in mind.

And why should the apple peel be the symbol for these people?  Says Levine:  “If you’re a lefty, you know that it’s going to be harder for you to use a regular vegetable or fruit peeler to peel your apples to make Haroset.”  But Jews have a special responsibility to reach out to the southpaw community, especially on Passover.  As Levine notes, there is a robust debate in rabbinic literature about which way left-handed people should lean at the seder -- to the left, like everyone else, or to the right. Does Levine have any hesitation about mentioning the suffering of slaves in Egypt, contemporary migrant laborers, refugees, and LGBT people in the same breath with the challenges of people who are left-handed?  “We’re not implying that everyone’s difficulties are the same,” he says.  “But Jews are taught not to rest until everyone has equal rights - or equal lefts, as the case may be.”

The second plague described in the book of Exodus is צפרדע - Tsfardei’a - usually translated as ‘frogs.’  But some traditional commentators say that really, the Hebrew word tsfardeia refers to crocodiles. After all, frogs are unlikely to be as destructive and fearsome as the plague of tsfardeia is described as being.  And crocodiles famously inhabit the Nile River, and crocodiles were even worshiped as gods in ancient Egypt.  This is enough evidence for the Spanish-Jewish sage Isaac Abravanel to conclude that the plague of tsfardeia actually refers to crocodiles.

So instead we’ll have to teach our preschoolers to say:
“Where’s the seder, alligator?”
“In the Nile, crocodile!”

A is true (see http://www.tabletmag.com/jewish-life-and-religion/189609/matzo-buttercrunch )

B is false (though the references to the orange/tomato/olive/pineapple are all true, as is the fact that there is a debate in rabbinic literature about which way left-handers should lean at the seder.)

C is true (or at least, that's what Abravanel thought, though his is a minority opinion.  See http://zootorah.blogspot.com/2009/01/frogs-and-crocs.html)

Posted by Rabbi Robert at 11:11 AM No comments: Links to this post